There is a growing awareness in our society that gender is more than the sex that is assigned at birth. Gender identity is no longer an esoteric concept for child development experts. The importance of understanding gender identity is increasingly important for educators and leaders of youth programs.

We have produced a briefing/background paper on gender identity. We invite you to download this paper by clicking here.

In a previous post, Understanding Gender Identity in Young People, we reviewed the terminology surrounding this topic.

In this post, we interview Dr. Diane Ehrensaft to shed more light on this topic. She specializes in research, clinical work, and consultation related to gender-nonconforming children. Diane is an associate professor of Pediatrics at the University of California San Francisco and a developmental and clinical psychologist in the San Francisco Bay Area.

Q: Is gender inborn or learned?

A: As implied in the title of my book, Gender Born, Gender Made, the answer is neither—it’s both. Each one of our genders includes a combination of nature, nurture, and culture. To really answer this question, of inborn or learned, we have to differentiate gender identity from gender expressions: gender identity is our inner sense of self as male, female, or other; gender expressions are the ways we show our gender to the world—our appearance, our activities, our words, our ways of relating to the world.


Regarding nature, the most important concept to mark is that gender does not lie between our legs; it lays in our brains and our minds, and the messages those brains and minds send to you inside about what your gender is are paramount.

Q: Developmentally, when does this happen?

A: Our old developmental theories said one thing, newer developmental theories say another. I’m going to answer according to the new. By the second year of life a toddler can exhibit both understanding of the gender label given to the child by the outside world (i.e., They call me boy; they call me girl) and their own internal sense of their core gender which will either match that label (the cisgender child) or show the incipient signs of being opposed to that label, as when a toddler, upon developing language, says, Me not boy, me girl. From age two to six, we all learn what it means to be a boy or girl or other, in other words, how to “do” our gender. We learn this through observation, direct teaching or coaching, even gender policing, and through our close relationships with those around us. 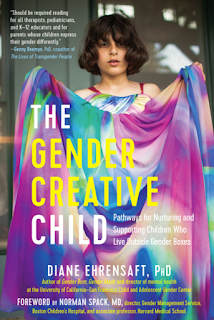 By age six, most children will have a fairly stable sense of their gender identity, but not all children do, and some children may go through several iterations throughout their childhood until they land on “the gender that is me.”  The most important element in this developmental process is that the adults around the child allow children the freedom to establish their own gender selves, rather than have it dictated by others.

Notable is that in traditional gender theories it was expected that for a child to have successfully reached their developmental markers regarding gender identity, they must have a clear and stable sense of themselves as boy or girl by age 6, and that sense should match the sex assigned to them at birth. But if a child says, “Hey, you all have it wrong, I’m not the gender you think I am” that child is not acknowledged as capable of having a stable gender identity by age six. That child is told, “You are too young to know.” That child is a member of our youngest cohort of transgender people, and we have to ask the defenders of the traditional developmental theories—How come a cisgender child can know who they are by age six, but a transgender child cannot?

Q: What is gender fluidity?

A: Gender fluidity is living outside binary gender boxes—male/female; boy/girl. It also indicates a flexibility and creativity in composing for oneself a gender mosaic, if you will, based on a potpourri of the social expressions of gender within one’s culture and also on an internal sense of self as neither male, female, but somewhere in between or all and any rather than either/or. A child can be gender fluid at any moment in time (think pink boys) or over time (ballerina for awhile, then Darth Vader, then a “gender hybrid”).

Diane Ehrensaft, Ph.D. is an associate professor of Pediatrics at the University of California San Francisco and a developmental and clinical psychologist in the San Francisco Bay Area, with a private practice in Oakland, California.  She is Director of Mental Health of the Child and Adolescent Gender Center and chief psychologist at the Child and Adolescent Gender Center Clinic at UCSF Benioff Children’s Hospital. She specializes in research, clinical work, and consultation related to gender-nonconforming children, lecturing, publishing, and serving as an expert witness on both topics nationally and internationally.

Posted by Learning In Afterschool at 11:50 AM

Read Our Other Blogs